All Chi'd up in St. Louis

After a late Sunday night concert, I definitely thought I was going to be exhausted Monday for the drive across Illinois. Turns out, getting out on the road and pumping up some Led Zeppelin 3 (favorite song “That’s the Way”) got the adrenaline pumping up more than sufficiently.

I ended up driving quickly through the state, because I left later than planned and the concert in St. Louis was at 5:30. I always like to get to a concert a couple house ahead of time. That way, I can warm up the fingers, get a nap or some meditation in, and generally clear the mind of the day’s stresses. The boys in the LA Duo call this “Chi-ing up.” Also, I can feel the room and how it responds to my sound. 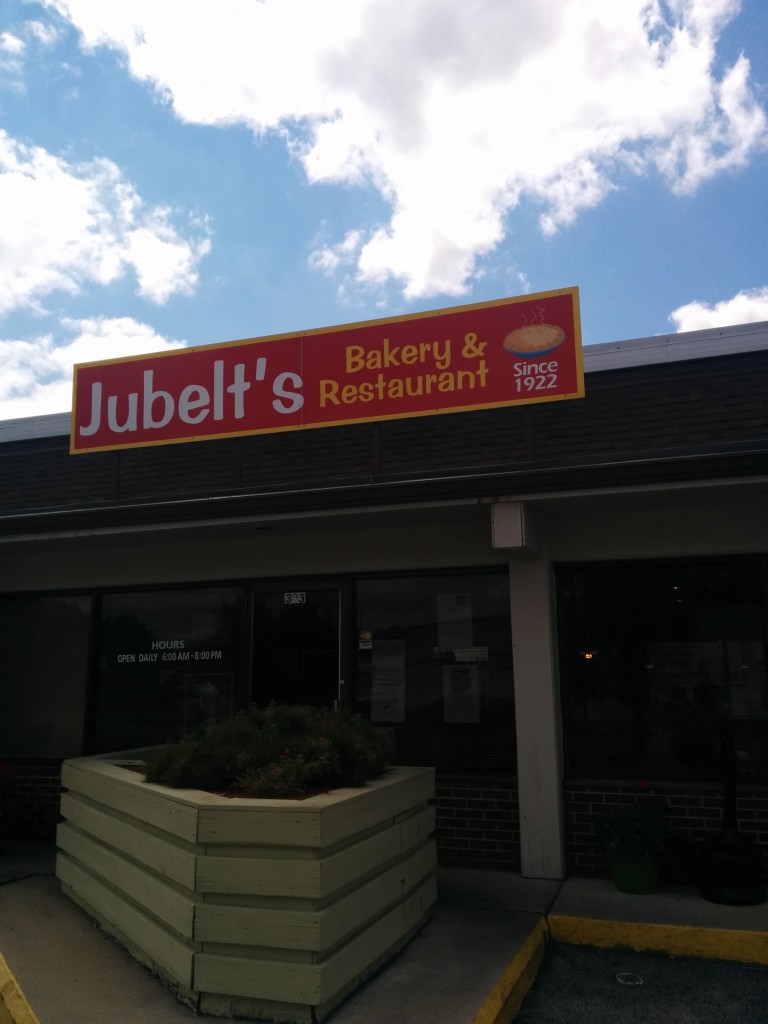 Having covered most of the state, I stopped in Litchfield to check out a place called Ariston’s Cafe. This was recommended as a great place to stop in and play by Bruce Forman, the founder and inspiration for the tour. Ariston’s was closed, so I went next door to Jubelt’s Bakery. After unsuccessfully communicating with the manager, who kept making employees run back and forth to her office before telling me her message, she finally came out and told me it was probably not an appropriate place to have a concert and they don’t want solicitors. Eventually, she said if I didn’t ask for tips, I could stay. I was honestly a little confused and irritated by the fact that she was so hesitant for some free entertainment! I guess hypothetically if I was terrible, I might drive customers away, but come on…Anyway, I played for the folk’s there and people clapped and everything. I even got the cashier to dance a little! Just goes to show you how a little persistence pays off. 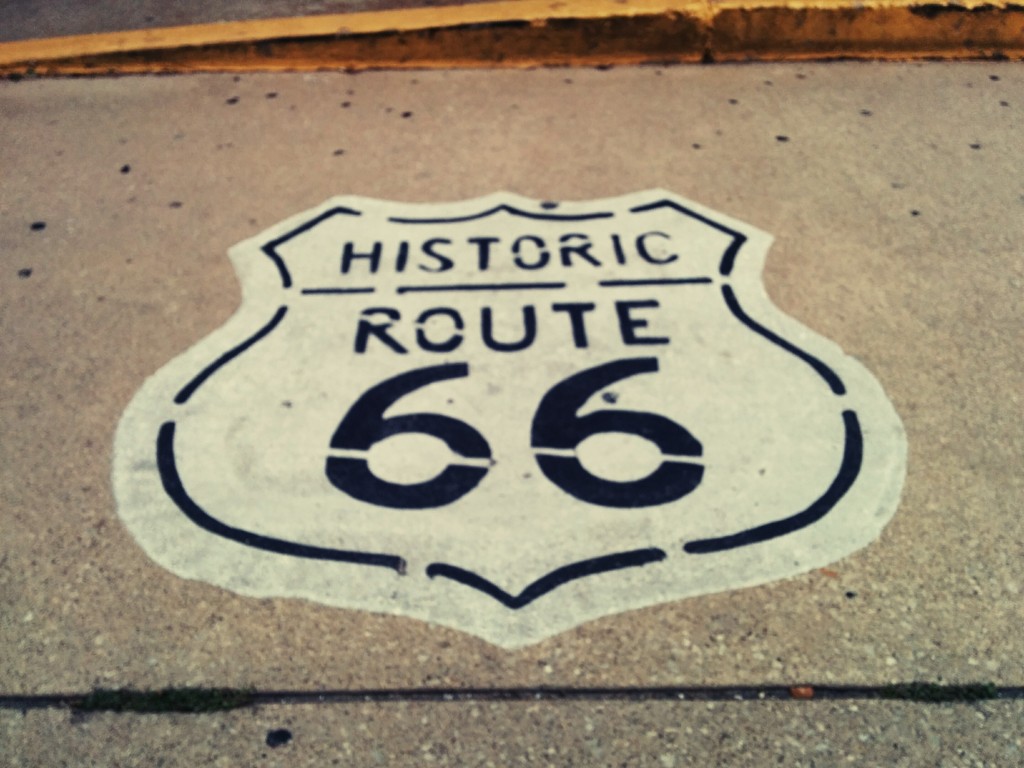 I then drove to St. Louis and played at the Tavern of Fine Arts. This is an excellent venue for guitarists. It sounds great, I was surrounded by beautiful paintings, and they serve incredible food to the patrons quietly while they are listening. Rifftime recorded the show and you can watch it here. And you can tip! I was happy to meet Bill Ash, from the St. Louis Guitar Society, who interviewed me afterword for his radio program. I’m going to be broadcast in St. Louis soon! Also, I met a woman named Lucille Cimo. What are the odds?

The night wasn’t over. Ben Birkenmaier, who graciously hosted me and the LA Duo, took me out to another couple venues for open mic night on the other side of town. Atomic Cowboy was a great bar with an awesome crowd and they loved the music. Ben and the guys played a set too! Then we went to Gramophone, which had a hip-hop group, a Michael Jackson doppelganger, and a bass+drum/vocals rock band. I closed out the night with my “shredder” set, including the lightning fast Villa-Lobos Etude no. 2. My Chi never felt better… 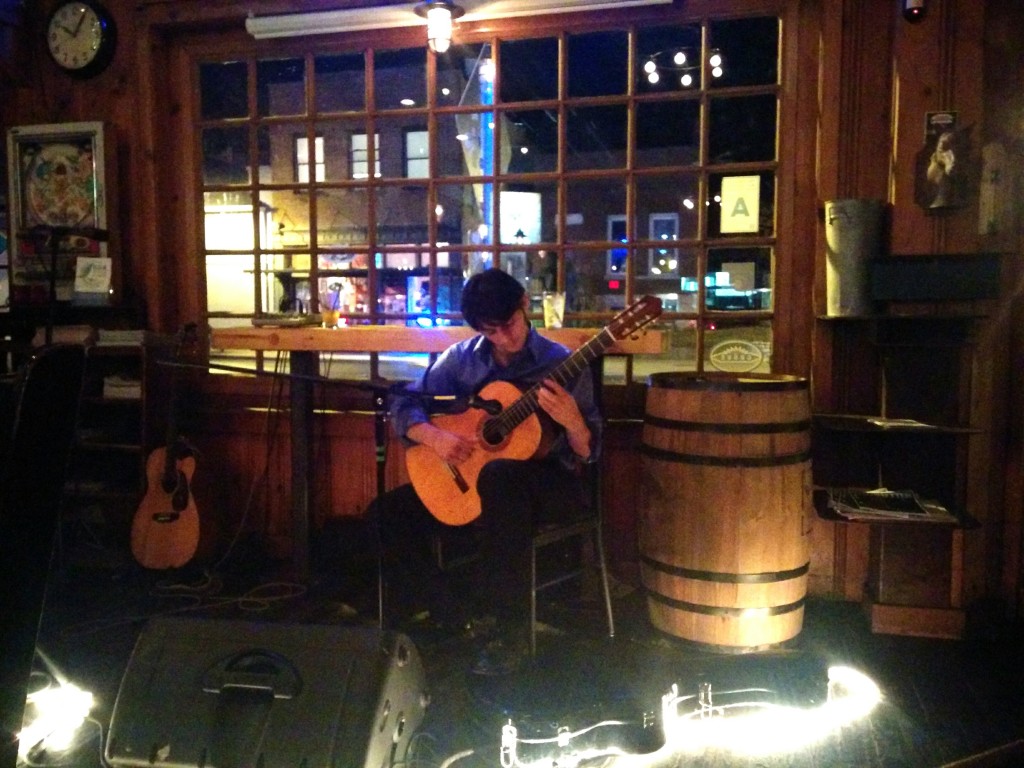 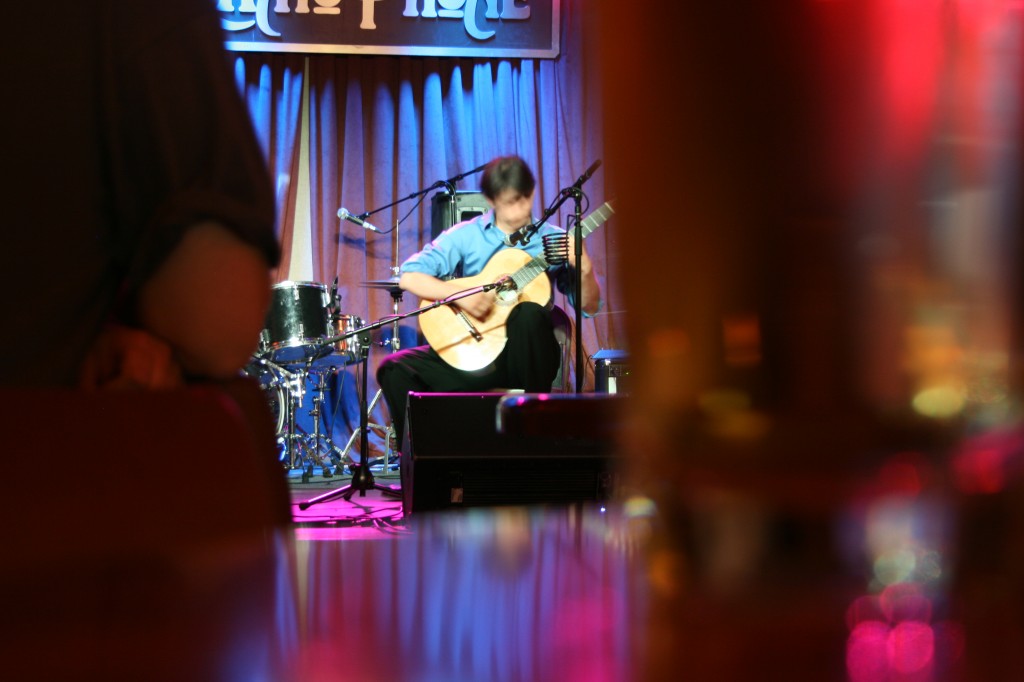 Shredder set to close at Gramophone

St. Louis, I can’t wait to come back.